Nothing is better than a surprise. On Sunday, my family got together and surprised my Grandparents. A couple of weeks ago was my Grandparents’ 50th wedding anniversary and they had spent it in a hospital in Santa Fe because my Grandfather was having low oxygen levels. In July the family had planned to get together at Lake Ft. Gibson to have a celebration of this feat. I was predicting that one of the Grandkids or myself would give it away that we were meeting at the Lake for this purpose. Nevertheless, it worked. Quoting my Grandmother when we brought out the presents: “We have been setup.” It was a fun weekend and it was a time for the Memory banks. Laura rode in a boat for the first time. I got to spend quality time with Family I only get to see a short while when I blow through Tulsa. It was a great weekend. Minus what happens next.

You know I seem to have a productive day and I try to carry on into the night and something seems to always come up. Thus is the case for last night. After a great weekend at the Lake with Family, I thought I would make Monday a very productive day and get my checklist down to things that could be taken care of on Wednesday when I return from Tulsa. For the most part I was pretty productive, I completed my updated Resume for Mid-America, I completed what I call my busy work for school, I wrote my upcoming Lecture for my class on Monday. I felt as though I was being extremely productive. Last on my needed, to get completed was my reading for class on Tuesday.

Ashley went to bed, so I thought I would put more Aloe on my nice sunburned shoulders. Just as I did it felt like I was being attacked by the itching bugs from Hell. So I jumped in the shower to get the crap that I put on off my skin. This helped for about 30 seconds. So I ran around the apartment trying to sooth the itch. Which this woke Ashley up, Laura slept thought it completely. Ashley WebMD a couple of sunburn issues, then called her Mom, by the time this had all happened I took a Benadryl on the advice of Ashley. I was not about to go to the ER as a $900.00 ER bill was not something we needed at this time. The itching started to go away but along came the drowsiness of the Benadryl. So I thought would at least try to read one chapter which would put me in good shape to read before class on Tuesday.

I crashed in the middle of the chapter, book over face and highlighter in hand. So today I think that there are some nights when my intentions are good but something always comes along to sidetrack me. Last night just sucked. I hate taking pills and I hate being behind on my reading. However, I have found a way to catch up this morning. Thank God for waking up at 5:00 am to do reading before Bible Study. Now I am at Starbucks in Tulsa killing time before my 2:00 pm class. But I keep thinking to myself that the itch that I had last night really sucked. So lesson to learn from my stupidity: USE SUN SCREEN AND REAPPLY AFTER BEING IN THE WATER FOR A LONG TIME. This prevents being in a place that is not as comfortable.

Some Pictures from the weekend. 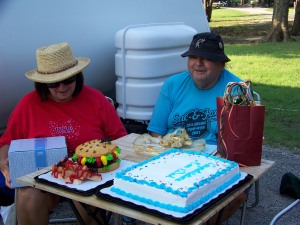 I pray for you.

I do not at all understand the mystery of grace - only that it meets us where we are but does not leave us where it found us. --Anne Lamott View all posts by mattdamethodist

This site uses Akismet to reduce spam. Learn how your comment data is processed.